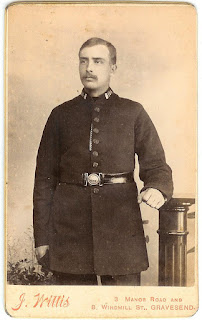 For details of a recruit from the Metropolitan Police then you are likely to be in luck as many records have survived – although not in the form of individual service records.  Records are held in the MEPO class at The National Archives.  But the researcher must be prepared to spend many, many hours trawling through old registers in order to pick up the scantiest of details on joining and postings.

For details of recruits from the City of a trip to ’s Metropolitan Archives will be in order.  Records are held in the CLA/048 series.

For details of a recruit from the Royal Irish Constabulary then again you are likely to be in luck due to Jim Herlihy who has spent many, many years indexing surviving records.  A copy of his index can be found at The National Archives – or perhaps might be able to consult his book in some other archive or library:

The records themselves are held at The National Archives in the HO 184 series.

Now to the crunch.  If the recruit you are looking for came from one of the English or Scottish Borough Constabularies then you may be disappointed.  Survival of records is sketchy to say the least.  First, research will need to be conducted to see which of the modern day constabularies covers the area you are interested in.  If the modern day constabulary has a then they may well have taken over the old service registers.  If there is no museum then the County Record Office covering the appropriate area should be tried.  Do not get your hopes up as few service records have actually survived. 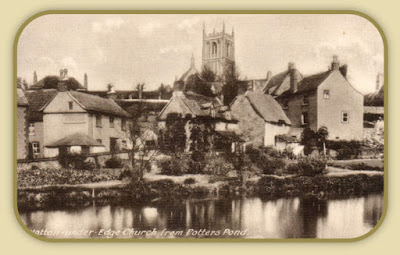 From Bristol Constable to Sergeant
to Innkeeper in Wotton-under-Edge.
For the story of HK Police Sgt. 91 Daniel Hall (1853 – 1913)
please refer to my 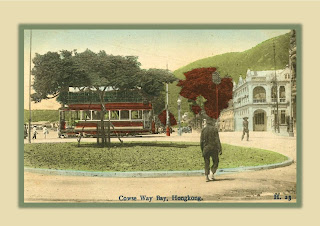 For the story of Job Witchell, a Gloucestershire lad who served with the Hong Kong Police in the 19th. century please follow this link:

If your ancestors were British Expatriates serving in HK
in the 19th. century and you would like help with your research
then please: 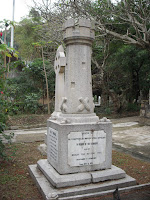 Whilst working in I would return to the every two and a half years on a long vacation leave.  By “long” I mean anything from three to five months.  On one of these long leaves in the 1980s I spent most of my holiday in the Search Room of the General Register Office at St. Catherine’s House in Kingsway, .  How I loved those rows and rows of heavy tomes containing the vital records of , and British Overseas. 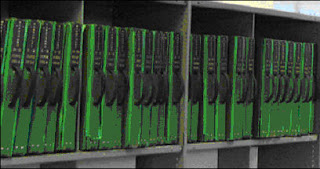 The task I had set myself during that particular leave was to extract all HONG KONG DEATHS from various Army Indexes.  However, with the tiny typeset in the huge heavy tomes that was no easy job, especially, as the work had to be performed standing up. 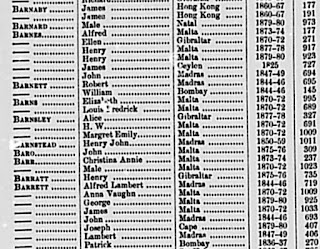 I became such a permanent fixture that on many occasions I was mistaken for a member of staff.  My time was spent compiling handwritten lists of the relevant HK entries  and then, when I returned to , I spent months collating the information with that already in my HONG KONG BURIAL INDEX.   This was many years before the advent of home computers so The Index was formed of paper slips – thousands of them all filed away in alphabetical order in a lovely rosewood cabinet. (For the story of my project transcribing the headstone inscriptions from the please follow this link).

When I retired in the 21st. century I was faced with the never ending task of converting my dear old paper index to a computer database – another huge undertaking.  Now that we have reached 2015 it strikes me that some of the work which I undertook all those years ago might be of use to amateur genealogists searching for means of finding information on family members who spent time in Hong Kong in the 19th. century.  Obtaining death certificates is difficult to say the least and prior to the mid 1890s is virtually impossible.  However, all is not lost if the individual was a soldier (or was the wife or child of a soldier) as a certificate can be provided by the General Register Office.  The following is the first of my lists for British Army Deaths in Hong Kong and covers the period 1860 – 1867.

Before ordering a death certificate from the General Register Office it will first be necessary to obtain the FULL index reference.  The days of perusing those lovely huge volumes of indexes at Somerset House, St. Catherine’s House or The Family Records Centre is now long gone but FREE ACCESS  to GRO indexes is available at  the following Libraries & Archives (but it is always worth telephoning first to check that they still have what you require!):

If you are able to access a Family History Library/Search Room () then the following microfiche relates to Army Chaplains Death Indexes 1796-1880):   6137109

Several subscription/pay as you go websites also have these indexes.

On the list which follows I have included a note showing where further information is available from myself for burial and/or headstone details.

Whilst in Hong Kong 1975 – 1995 and on my trips back to Hong Kong since 2009 I have photographed all surviving memorials so burial details may well come complete with a photograph.  Even those where an inscription is not available may come with a photograph – but you would need to know the whole history of the cemetery to work that one out!  Do not fear I would explain all.